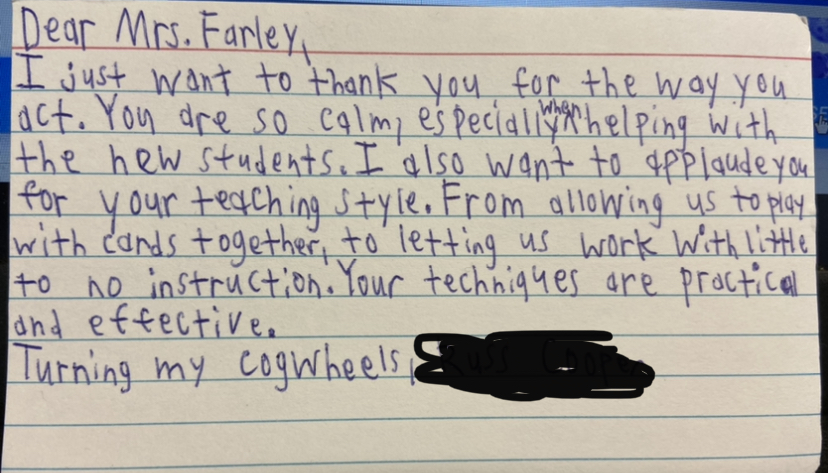 My middle had Flu B. In that week, I managed to only miss ½ a day of school while he missed 5 days. He’s old enough to rest on his own and I can check on him throughout the day. Plenty of willing family and friends to come to his rescue if needed. Only one me to get up in the middle of the night, so sleep was at a minimum. My neck hurts, back hurts, and I’ve done more yoga stretches in the last week than in a year. All for the price of love.

That one ½ day produced a 1 page long letter from the substitute. My class doesn’t logistically work great with a sub because it is a very busy, noisy inquiry-based environment. They are creating, building, and problem solving. I had set up the day with 30 minutes each hour for group meetings and 30 minutes for quiet individual work. Preparing for a sub is one of my least favorite parts of teaching because I am very nervous for them to never want to come back. There is a shortage of these precious humans in our area and the pennies on the dollar we can offer them is not the only reason why. Kids can be hard on a sub. Remember that? “At 9:22, everyone get up and go to the pencil sharpener at the same time! It will be hilarious!” That is a direct quote from a note written by Jeremy in my 5th grade class who passed it quietly while we all tried to contain our church giggles. Same now, only the notes come more quickly on sneaky texts under the desks.

Upon receiving the sub’s note, I was both shocked and then dumbfounded at my naivety. But in half a day?? Really guys? After dealing with the specific names left and chatting with each class, I realize that it’s not the end of the world but when you are going on a few hours rest you are already feeling defeated.

That evening, I received a text from my colleague asking if I had gotten a note from a certain student. She sent me a picture of her’s and I swooned.  All the heart eyes! I told her that I didn’t believe us to be at this stage of appreciation yet. That he must just really love her class. I even reminded her that I just switched to a semester format so I haven’t had him long and we are still getting used to each other. Why would she give me this heads up? Because we teach 7th grade and the art of a handwritten thank you note is mostly lost…especially on a 12 or 13 year old. Our reactions are everything to them about most things, so I was happy to know it wouldn’t be a hidden camera joke or I wasn’t being punked if he handed me one, too.

The next morning (and keep in mind, he didn’t know how bad I needed this as he is not in the ½ day that had a substitute) I was handed the sweetest 3×5 notecard I ever did see. Not only was it written carefully in his best penmanship, but it was so specific and sincere. I took attendance and got the class started and so not to embarrass him, I waited until the rush of group work began and quietly told him it may just be the nicest thing that has happened to me in a long time. His response made me even happier.

He said, “Remember the first day of class when you told us that school is the only place that you looked forward to when you were our age? Well, my house can get kind of crazy and I decided to thank the people who are there. I got kind of sad and this made me happy.”

Write someone a note today. Like now. Just stop and do it. Even if it’s short. Even if you have to go get stamps and mail it. Have fun with it. Decorate with stickers or markers or paint even. Just write it. There are a lot of people who would love an old fashioned Valentine this time of year. Some of my favorite, but most painful, reminders of Shane are when I unexpectedly find a note he had written me. Priceless. Do it! If you don’t have time to write it, text it. Email it. But writing it will be so fun and fulfilling and might even make you happy. 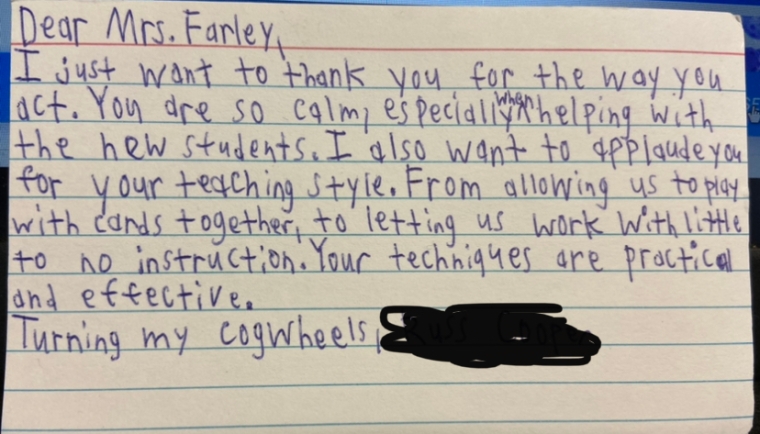